29 June 2021
#IPEVLIVE | Exiting Violence: The Uses and Abuses of Memory

Transition from Violence: Lessons from the MENA Region | Tuesday, June 29

This panel will explore the role of memory, memorials, and narratives in sustaining or ending violence in the Middle East North Africa region, with a specific focus on Palestine and Israel.

There are few places on earth where violence and memory are more intertwined than in Palestine and Israel. For centuries, violence has been common, as well, in many other regions around the world where residents eventually came to terms, or at least came to accept, resolutions and arrangements that allowed some resumption of normal life. In some cases, those outcomes relied on erasing memories of the history of conflicts while in other regions, such as North America and South Africa, resolutions were achieved by recognizing, in at least some measure, historical injustices committed against indigenous populations, which in turn led to various forms of reparations.

Four experts on violence in the MENA region will review the particular dynamics of memory in Palestine and Israel, how those memories shaped the past, and explore how approaches informed by the social sciences could reveal opportunities for a less violent future.

In a short conversation with Hal Plotkin, Michel Wieviorka will review the contents and findings of the IPEV Live panel discussions and reports and provide his observations and recommendations for future efforts. Wieviorka is the distinguished former president of the International Sociological Association (2006-2010) and president emeritus of Fondation Maison des Sciences d’lhomme, which organized the International Panel on Exiting Violence. 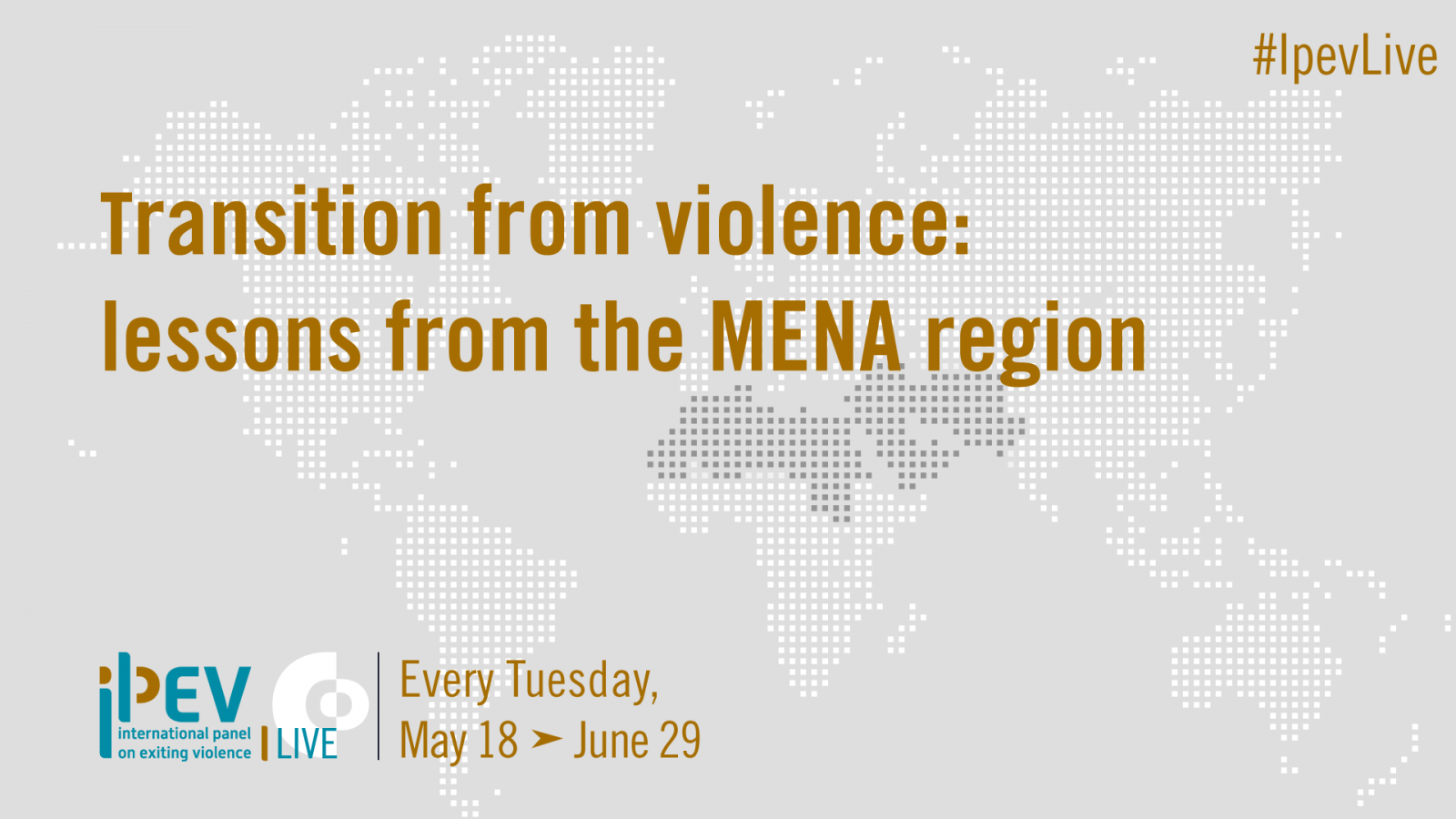 Violence and the widespread public desire to transition from violence has been a major concern in the Middle East North Africa (MENA) region for many Years. More recently, the pandemic has increased the level of misery and dislocation in the MENA region amid fears that desperate current circumstances may trigger more violence. At the same time, the pandemic crisis may also present new opportunities for a more peaceful future in the MENA region and even a more hopeful model for the rest of the world.

To discuss these risks and opportunities, the Fondation Maison de Sciences de l’Homme is launching #IPEVLIVE, a series of eight live conversations as part of IPEV - International Panel on Exiting Violence.

Transition from violence: lessons from the MENA region
Every Tuesday, from May 18 to June 29, 2021
11AM New York | 5PM Paris | 6PM Amman
Register

Distinguished scholars and representatives of international organisations and civil society will share their findings, research goals and recommendations designed to enable a transition from violence, during one-hour conversations revolving around 3 main themes:

1. The long tail of the Arab Spring and its unresolved root causes

May 18 | Navigating the Transition from Violent Radicalization in the Context of Autocracy
May 25 | Listening to Women in the MENA Region Before and After the Arab Spring
June 1st | Arab Uprisings: The Evolution of Arab Society

June 8 | The Pandemic as a Magnifying Glass: What Conditions that Prevent Ending Violence Can We Now See More Clearly?
June 15 | Seizing the Opportunities Created by the Pandemic Crisis: Exploring the Emergence in the MENA Region of New Models of Governance and Leadership

3. Perspectives from the MENA region on future opportunities to exit violence

June 22 | Extending the Reach of Institutions and Influences that Reduce Violence in the MENA Region: Capacity Building at Scale ?
June 29 | The Uses and Abuses of Memory: Case Study Palestine and Israel // Closing discussions

This series of online conversations will be moderated by Hal Plotkin, an American journalist and broadcaster and a former Senior Policy Advisor in the administration of the U.S. President Barack Obama. Attendees will be encouraged to participate by asking questions.

02/07/2021
Podcasts | IPEV Live
From May 18 to June 29, 2021, #IPEVLIVE brought together 25 experts and academics who shared, during 7 discussions, their research topics, conclusions and recommendations aimed at enabling an end to violence in the MENA region. This online...
Lire Plus

23/07/2021
[Closed] Call for applications | Research grants on exiting violence
As part of the sustainability of the IPEV project (2017-2021), in partnership with the FMSH and the Carnegie Corporation of New York, Columbia Global Centers | Amman has co-established a six-month virtual fellowship to support scholars working in...
Lire Plus