This conference is organised with the support of the FMSH as part of the programme Supporting the organisation of scientific events. 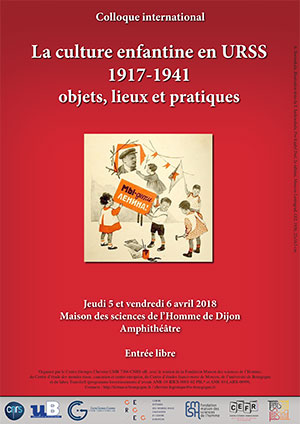 At the beginning of the XXth century, the child became an important subject for scientific study and the question of his/her education became central for public organizations in both Europe and the United States. Russia was no exception to this movement. After they came to power, the Bolsheviks set out to take charge of an ever larger and diverse child population including delinquent and abandoned children, as well as non-Russian children living in Russia and the Republics, and children of peasants. The Bolsheviks aimed to create a specific Soviet culture for children. This ambition was expressed in the discourse on children’s literature. In addition to Literary and textual
culture, this project also pertained to musical, visual and material (e.g. toys) cultures, which are now less well-known fields.

This project aims to focus on the study of these cultural objects and to analyze them in their conditions of creation, diffusion, reception and appropriation. Its purpose is to understand these objects, created by adults for children, in their practical and reflexive aspects. More broadly, the child is considered as a reader, spectator, listener, but also as an actor that was both a user and a creator of these objects. In this way, the speakers want to analyze how children engaged with the cultural products made available to them and the creations of the children themselves. In turn, they will analyze how adults viewed these objects and choices.

The political, educational and artistic projects, the forms of objects, their modes of mediation, pedagogical methods and practices will be define and compare.

the specificities of a Soviet child’s culture will thus be identified, as well as the implicit or theorized representations of the child that a society shapes with regard to age, class, gender, ethnic origins. Finally, the functions of these objects and the ways in which they carry out their ideological work and shape their recipients on the cognitive and educational levels will be examined.

This collective project will tackle several questions: how did different actors and professions interact to create these objects? What were the main debates on their conception and how did these theoretical considerations fit with the creation of these objects? What was the place of cultural transfers in shaping these objects? In what places and contexts were these objects disseminated (school, library, youth organizations, family environment, etc.)? How were they used and by whom? What do the forms of these objects tell us about their authors and their recipients?

The study of cultural objects is at the crossroads of political, social, cultural, art, science and education histories but also of anthropology. This project seeks to bring together specialists from different disciplines and encourage a multidisciplinary and interdisciplinary approach. A particular attention will be payed to the trans-national history and the circulation of people, objects and concepts. This context brings insights to the Russian and Soviet situation in its connection with other regimes and historical changes, such as the advent of leisure and consumer societies. Finally, this project will examine, in a nuanced way, the ruptures and continuities traditionally elaborated by historiography between the Imperial past and the Soviet regime on the one hand, and the 1920s and the beginning of Stalinism on the other.