The prize of social History is awarded to two PhD thesis on social History, in every sense of the term, from the 19th to the 20th century, and dealing with :

The prize is awarded to a PhD thesis (co-supervised or not) defended in a French educational institution during the two years preceding the award.

The jury of the prize is composed of:

Go to the call for applications 2019

Opening of the call: December 1st

Deadline for applications: January 31st of the following year 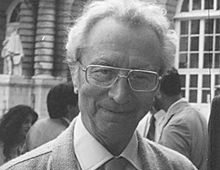 Mattei Dogan (1920 –2010) was a political sociologist and senior research officer emeritus of the French National Center for Scientific Research (CNRS) and professor emeritus of political science of the University of California, Los Angeles (UCLA). Over a period of 22 years, he also taught at UCLA, Yale University, Indiana University, the Russian Academy of Sciences, the Institute of Statistical Mathematics in Tokyo, and the University of Florence. He also received the CNRS Silver medal.

His main research domains include elite studies, interdisciplinary approaches and international comparative analysis. His publications have dealt with the relationship between political behavior and religious behavior, political legitimacy and the ruling class. He also worked on the Italian society and political regime.

In 2001, Mattei Dogan founded the Foundation Mattei Dogan, exclusively dedicated to the social sciences, in order to promote the major issues of advanced – or post-industrial -  societies in a comparative and interdisciplinary perspective.